Sherloquito said:
Awesome! I think you're the only person doing this... I can't wait to start a ML with GD Chaves!

I'll be using it on PC... so if you want to PM me I'm happy to start testing the OF on PC at any time.
Click to expand...

Thank you! I haven't seen anyone do it so far and I really wanted to play on the Segunda Liga, that's why I started working on this project on PES 2018 and beyond. It's a lot of work but really rewarding when you finish it, I'm glad other people can enjoy it too

And yes, when it's done I will need someone to test the Option File on PC, I'll pm you later

It's time for an update!

I had another shot at Mafra's away kit since I was not happy with it. Here's how it looks right now, in comparison with the old one and a pic of the real one: 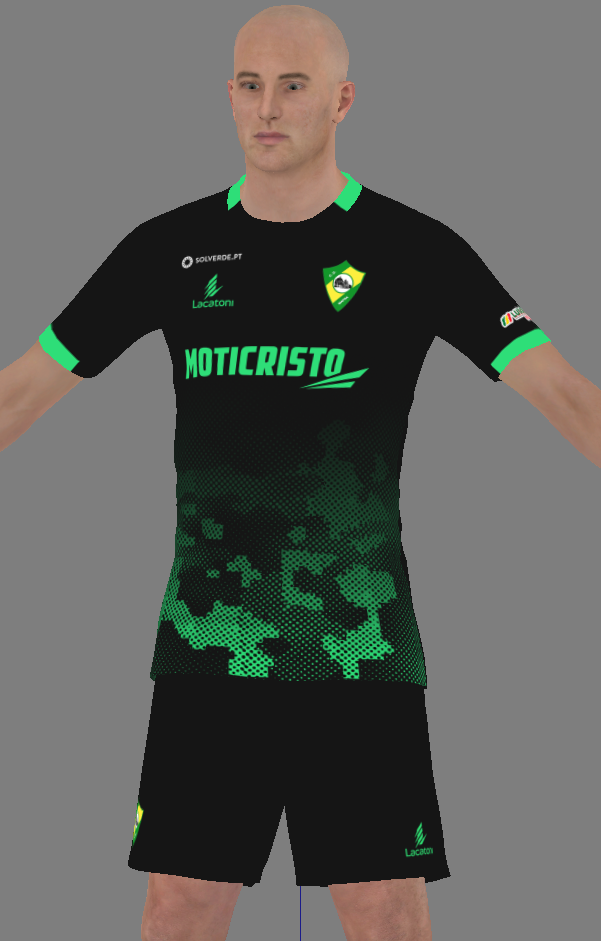 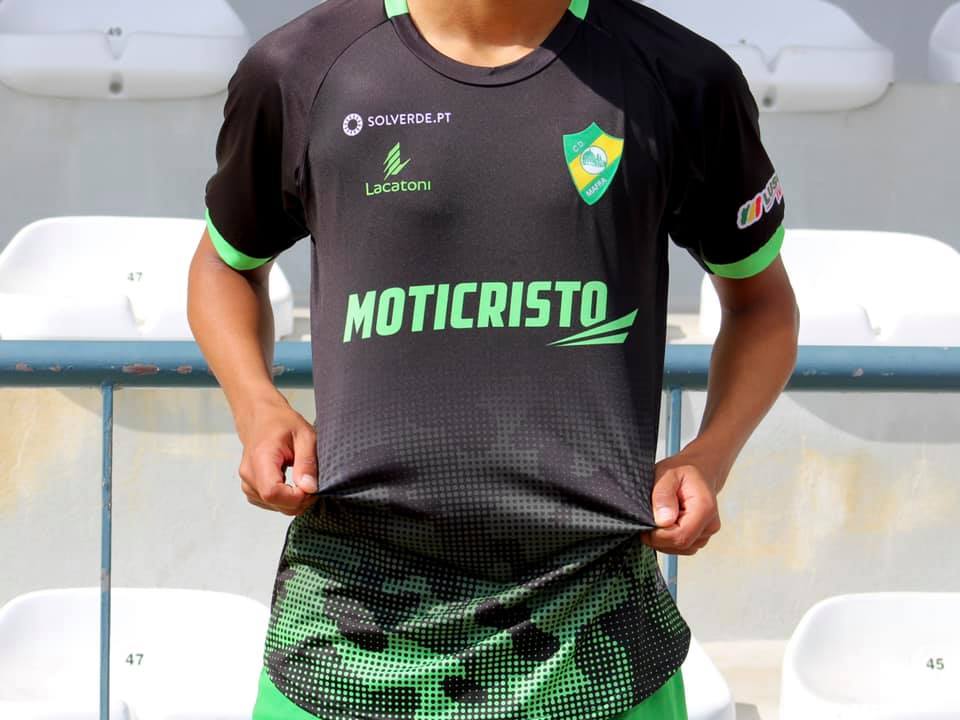 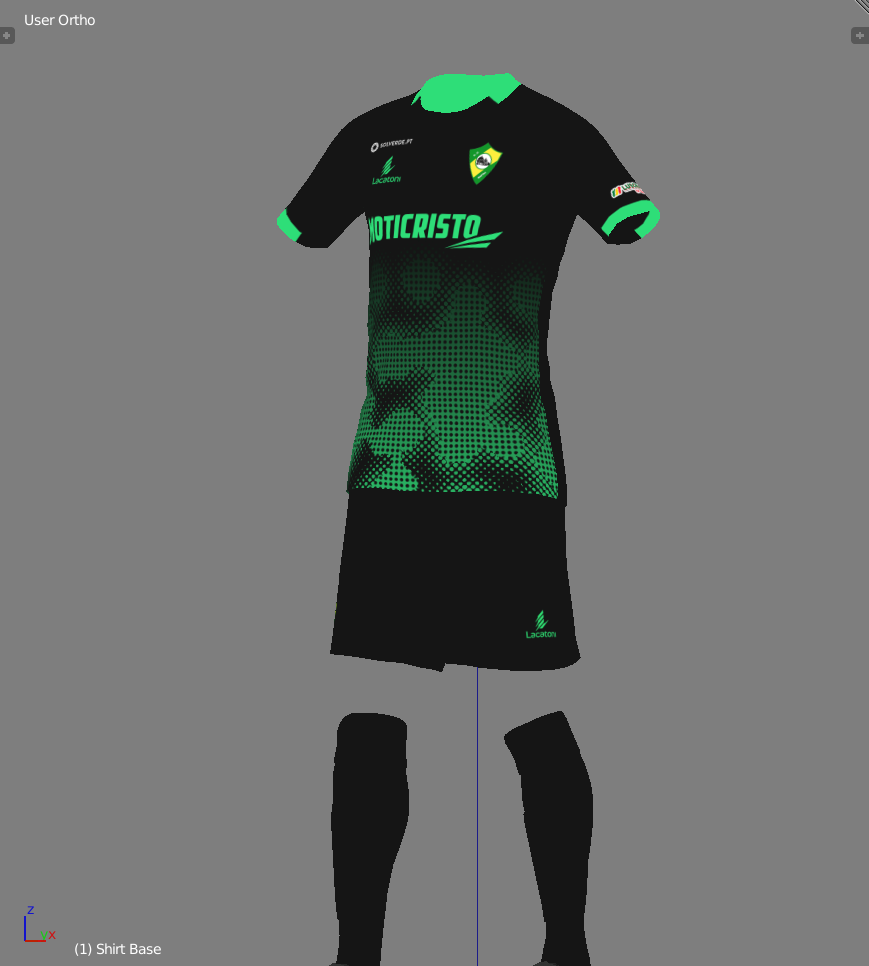 I think it's (really) far from perfect (it's far above my skills) but it's better so I'll post it soon here on the thread.

Yes I will add sponsor to Estoril kit, it's already on my to do list (it's better to use english on the forum!)

It's not always I can say this about a kit with one of these hard patterns... but this one if it's not perfect it's really close
Vizela third kit preview (WIP): 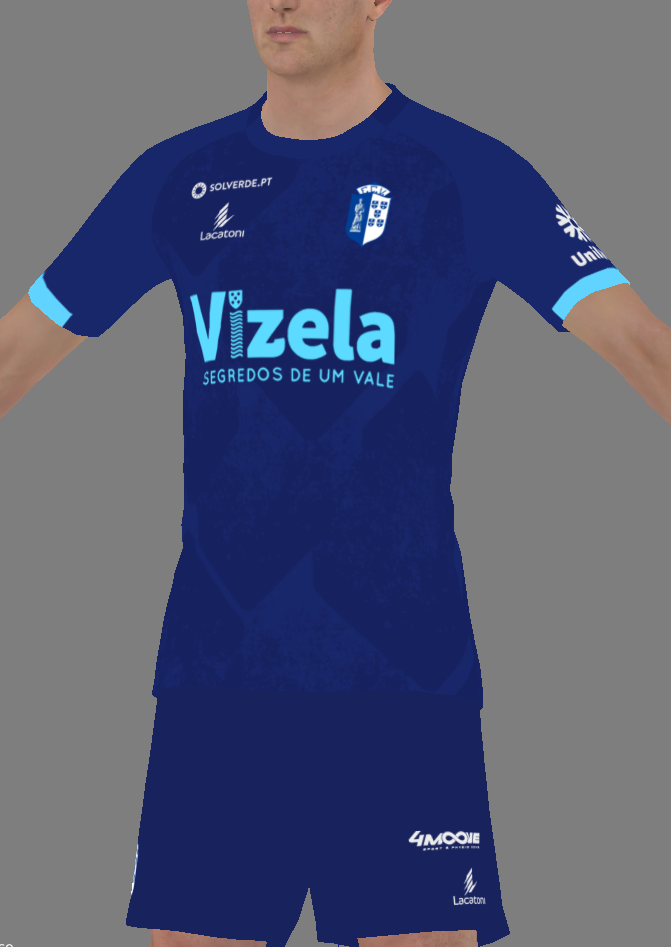 Time for a big update on the thread!

Right now, for the 16 teams of Liga Portugal 2, I'm only missing Mafra's GK kit (has a difficult pattern, I'll give it a go later) and Sporting da Covilhã away kit (haven't seen any pictures of it, I don't think they have used it until now). I'm probably going to start with the kits for the Campeonato de Portugal teams soon, and also keep on working on having the players in-game done and ready.
Last edited: Dec 9, 2020

will it work on pc?

i hope they add the second division for next year.

The Dude said:
will it work on pc?

i hope they add the second division for next year.
Click to expand...

It might work on PC as well. Last year it worked, but you had to apply some things manually (like stadium images) otherwise it wouldn't import. Not sure about this year, but the game is almost the same so I suppose it will be the same.

Yes, I wish they added the 2nd portuguese division as well

are you leaving 20 spanish teams?

The Dude said:
are you leaving 20 spanish teams?
Click to expand...

Yes you will still have the 20 La Liga teams. I recommend putting them into PEU League so you still have La Liga. You will lose Bundesliga, even though you can put those teams into the old spot of Liga NOS (the licensed one) which has 18 teams as well (sadly the league name and logo can't be edited).
Last edited: Jan 1, 2021

Hi everybody!
It's been a while since I post some news about this project, but don't worry, it's not dead - in fact, it is more active than ever now! Thanks to WE_DP99_PES, who is helping me a lot with this Option File. It will be released alongside a custom Liga NOS Option File as well - all to have the best experience of portuguese football possible in PES

I just updated the posts here not only with updates/fixes to my previous kits but also with a lot of new content. So, let's get started (the list today is big):

+ Added a custom design for all stadium images made by WE_DP99_PES!
+ Added kits for all the 8 Campeonato de Portugal (3rd division) teams planned for this Option File, plus a little extra team! All kits designed by WE_DP99_PES with just a couple fixes/details by me
+ Added/updated the sponsors for Académica, Académico de Viseu, Arouca and Chaves. All other teams will have sponsors as well in a near future

+ Made a lot of fixes and little updates in my previous kits, and made a few new ones as well, so here is the list of changes/additions:
- Académica: added a little pattern on the bottom. I did not see it before, it's hard to see on-pitch. Might still do adjustments later.
- Chaves: updated the kit with the sponsor on the front, and added an "official product" sticker (sticker design made by WE_DP99_PES)
- Cova da Piedade: made little fixes on both home and away (previous design had some little mistakes), and made the GK kit with the new template (they were using an older template before). Also added an alternative variation of the home kit.
- Estoril: the alternative GK kit (orange) I previously made was recently used as a third kit, so I updated the post.
- Leixões: added a new captain armband and made a little tweak to the GK kit color. Also made an extra kit that Leixões wore as a tribute to Vítor Oliveira, a portuguese manager who sadly passed away in november.
- Mafra: added the subtle pattern to the home kit, and made a little tweak to the away kit. Added an "official product" sticker and also added a GK kit with a pattern/template made by WE_DP99_PES, it's not 100% accurate but it's not bad either. Maybe it is possible to do better, perhaps when Konami updates the Lacatoni teams on Liga NOS
- Oliveirense: changed the captain armbands, and made the third kit (blue/grey). Also added an alternative variation of the home kit.
- Penafiel: fix on the design of the sleeves on the GK kits
- Vilafranquense: made little tweaks on the home kit, and added an alternative variation of that kit. Also made the version of the kit they used against Benfica on Taça de Portugal, with a sponsor on the front.
- Vizela: added an "official product" sticker.

Right now the only missing kit is the Sporting Covilhã away kit (and perhaps a couple variations/alternative combinations). I'll soon keep working on the players and also fixing mistakes that might still exist on the kits.

Soon I will also update the mini-previews of the kits on the thread and add some for the kits that don't have one.

Hi @philips_99, how are you?
Well, I really love you Option File and I have some suggestions
Why don't you insert Vitória de Setúbal and Desportivo das Aves in the league?
I mean, you can use them, because they already exist ingame

Leoribas26 said:
Hi @philips_99, how are you?
Well, I really love you Option File and I have some suggestions
Why don't you insert Vitória de Setúbal and Desportivo das Aves in the league?
I mean, you can use them, because they already exist ingame
Click to expand...

Hi, thank you for your words.
The slots of Aves and Setubal that were in Other European Teams are being used for Estoril and Feirense in this Option File, since I need 2 more slots in addition to the ones in the 2nd spanish division (because La Liga has 2 more teams than Liga NOS).

Also, the CD Aves team that was in Campeonato de Portugal gave up, they aren't playing anymore. There is however a "refounded" team - Aves 1930 - but it's playing in the distrital divisions and I don't think their team would be competitive enough to play along the others. Vitória de Setúbal, on the other hand, is doing great on the Campeonato de Portugal so far, who knows if I don't add it as an "extra" in the future (some teams like Leça, Estrela, União de Leiria or Torreense could be added as extra in the future), but right now the team list is closed, the teams present on the Option File will be the ones listed on the original post.
Last edited: Jan 24, 2021

Hi everyone, I hope you're all doing well.
It's time for a new update on the kits!

+ Académica: adjustments to the texture on the bottom of the shirt
+ Arouca: added "Solverde" sponsor to the kits, and added a variant of the home kit
+ Leixões: changed socks' color to orange on away kit, and made a change on the Vítor Oliveira tribute kit (so all players have Vítor Oliveira writen on the back of the shirt instead of their name)
+ Mafra: little adjustments to the home kit
+ Oliveirense: Re-made the GK kit with a new texture, and made minor adjustments to all the other kits
+ Penafiel: added sponsor on the back of the shorts
+ Sporting Covilhã: adjustment of the GK kit color
+ Varzim: added a variant of the home kit
+ Vilafranquense: added logo to the captain armband
+ Alverca: added new away and GK kits, made by WE_DP99_PES

+ Added sponsors for most of the teams (and updated Arouca as their sponsors were outdated), except a couple where I had no info about their press room. Keep in mind that for some 3rd division teams it's hard to find info about it so they might not be perfect or slightly outdated, but the Liga Portugal 2 teams are all correct (at least I believe so). The sponsors for the Campeonato de Portugal/3rd division teams were made by WE_DP99_PES, so thanks to him once again!

Also, I updated the Liga Portugal 2 kit previews avaiable on the posts, perhaps I'll do the same for the CP teams if I have the time.

To finish off, here's a close-up picture of the new, reworked Oliveirense GK kit: 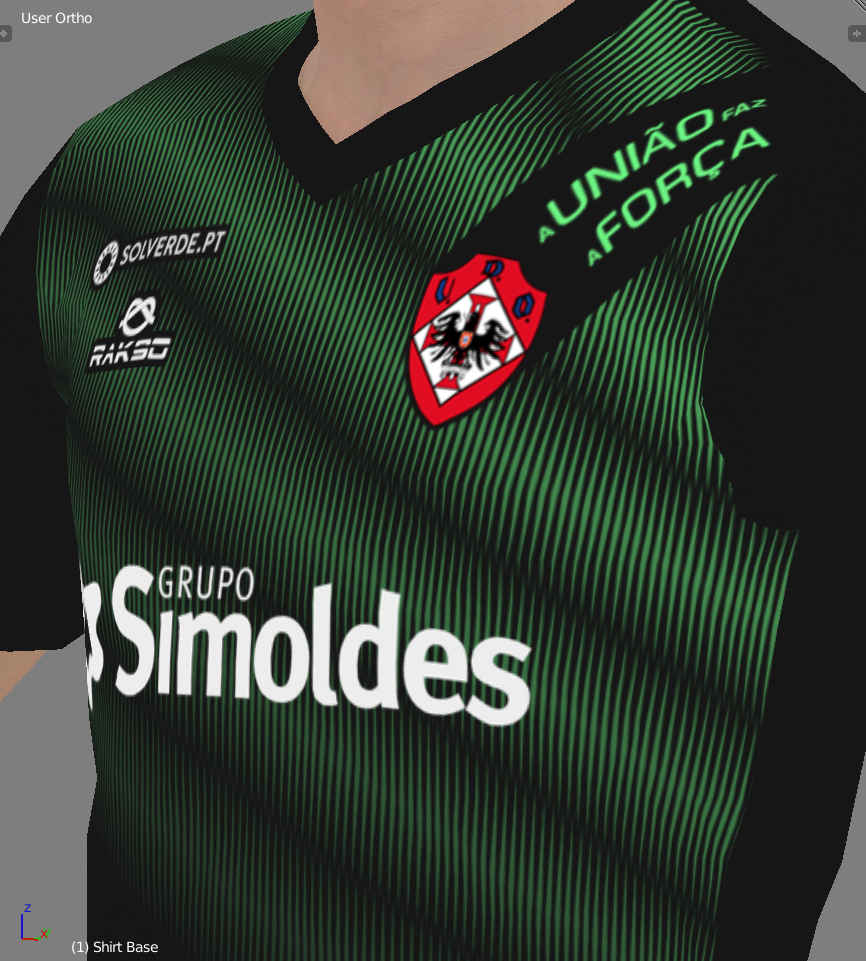 We are now working on updating the squads after the winter transfers and also working on the player appearances, then the Option File will be released.