Balague saying its a done deal.

Cannon ball said:
Looks like Mancini out, Pelligrini in.

Balague saying its a done deal.
Click to expand...

Shame, was hoping Mancini would stay with you for a few more seasons.

Yeah me too...Getting you into Europe,Winning the FA Cup then the epic Premiership win and most possibly another FA cup win all in 3.5 seasons.

In fairness they didn't even really look interested today, bet watching the Wigan lads parading around now makes them wish they gave a bit more.

Fair play to Wigan, hopefully they'll go now and get smashed for the next couple of days. :ninja:

A sack Mancini a cup and a league + europe but still fucking up a cup final like that against wigan so getting sacked is not so unheard of these days...

If Jose does not move to Chelsea...With Mancini Sacked and Alex retiring that should leave us pretty good.

Meyyappan said:
If Jose does not move to Chelsea...With Mancini Sacked and Alex retiring that should leave us pretty good.
Click to expand...

Pretty good for what? 3rd place?

So, you've got to not only win the title for the first time in centuries to keep your job, but retain it too? Or would they have kept him if it weren't for a 91st minute goal?

Yes, they won the title last season, but only just. Literally only just. He hasn't been good enough, imo. All indications show that City have moved backwards rather than forwards.

Agree with Joel. When you throw that much money at a club, and you don't win a single game in the Champions League, that's failure. The cup final can happen and 2nd place is no shame but by that points margin, again, it's failure.

I've personally found Mancini the most whiniest bitch in the league this season so am quite happy to see him go.

Staff member
A lot is now coming out that he was a horrible person to the City staff and players.

I guess so. I'm not particularly sad to see him go, he always did seem like a bit of a douche.

I'm sad to see Mancini go, but the club have made the right decision. Reading about how he's an aloof, arrogant, distant character, is no surprise to me, I've read all that stuff about him before. Something Graeme Souness said sticks out to me, when he met Mancini as a teenager at Sampdoria, that even then he wouldn't listen, he said he knew it all. Not much has changed since becoming a manager. That though can be a good thing. When Hughes was sacked, Mancini inherited a bunch of underperforming individuals, poorly organised, and couldn't defend to save their lives. He turned that bunch into a team, we improved defensively, and performances and results improved, and we narrowly missed out on a CL spot. From then on he put his own stamp onto the team, he stepped on the toes of any player who stood in his way, and showed them the door. There was no room for anyone not willing to put their necks on the line (except Balotelli at times). This approach was questioned, but we went from strength to strength, winning the FA Cup, qualifying for the Champions League, and then the title. He instilled a winning mentality, and never say die attitude into Manchester City. The players may not like him as a person, but they're probably thankful for him, and respect him in a way. Someone like Mancini, with his ego and character was what the club were crying out for, and those traits have turned us from perennial underachievers to winners. No more are we a 'hope for the best, expect the worst', sort of club, but there is now a self belief, a 'we can, and will do it' attitude.

The problem is now things have settled down a bit from that big transition. We've reached the top, and a more measured approach is needed. The club want young players to be developed, there may be a reduction in big money signings. That was one of Mancini's big frustrations over the summer, and he made that public. Alongside the fact he was courting other teams, things must have snowballed behind the scenes, and have just got worse from there. Mancini seems like the kind of guy who could start a fight in an empty room, and the deterioration in relationships with the board, looks to have negatively affected the team. We were poorly prepared, both mentally and physically on Saturday. Once you lose the dressing room, and the players, there is really no going back, and Mancini is the kind of guy who's too proud to try and apologise or backtrack on certain things.

What I don't like though is things like the kitman tweeting about how much he hated Mancini. I hope we don't now get a queue of staff or even worse, players, to spout how they always thought he was a twat, and he never said hi to me, and yadda yadda. Just leave it, and remember the good times he brought to the club. Despite the acrimonious ending, Mancini was great for the club, he changed the mentality, and made us winners. Thanks for everything Roberto, and good luck wherever you go. 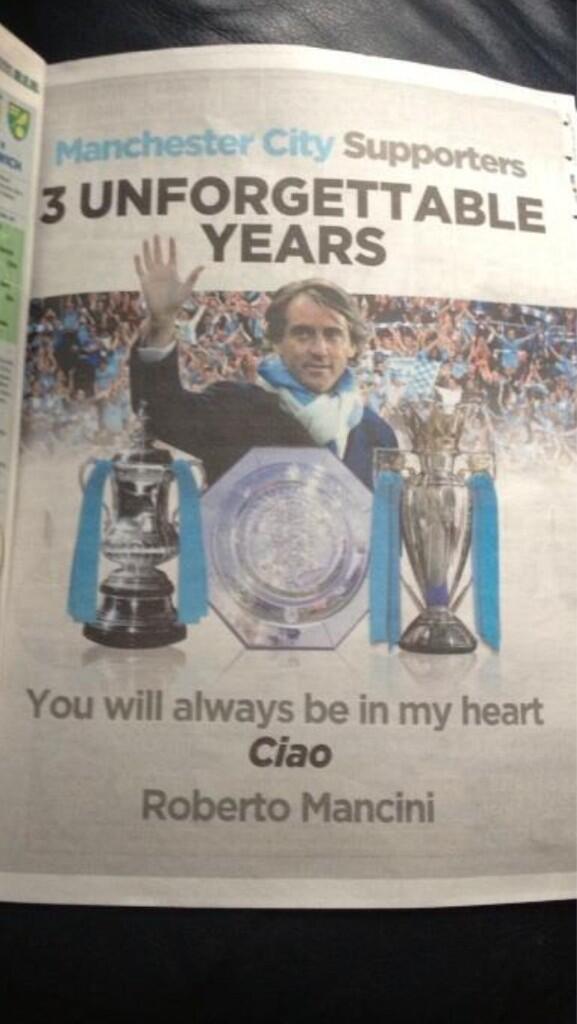 The City side playing football with Eli

Fernandinho's rather pricey for a 28-year old, £34m has been reported. Must be on course for a starting place in the team?

Seen him a few times in the Champions League playing for Shakhtar, seemed ok. Didn't stand out much but hey he's a defensive midfielder.

Could be potentially bad news for Gareth Barry. He's one of those underrated players, who doesn't appear to make much of a contribution, does he actually does. Always been solid for City. If he is to leave, it'll definitely be a coup for another English club. Someone like Fulham or Southampton perhaps?

Strange choices, what makes you think of them two clubs? He could do much better.
The arrival of Navas could also be the death of Milner. Mental how much money they have spent on the pair.
You must log in or register to reply here.
Share:
Facebook Twitter Reddit Pinterest Tumblr WhatsApp Email Link
Top