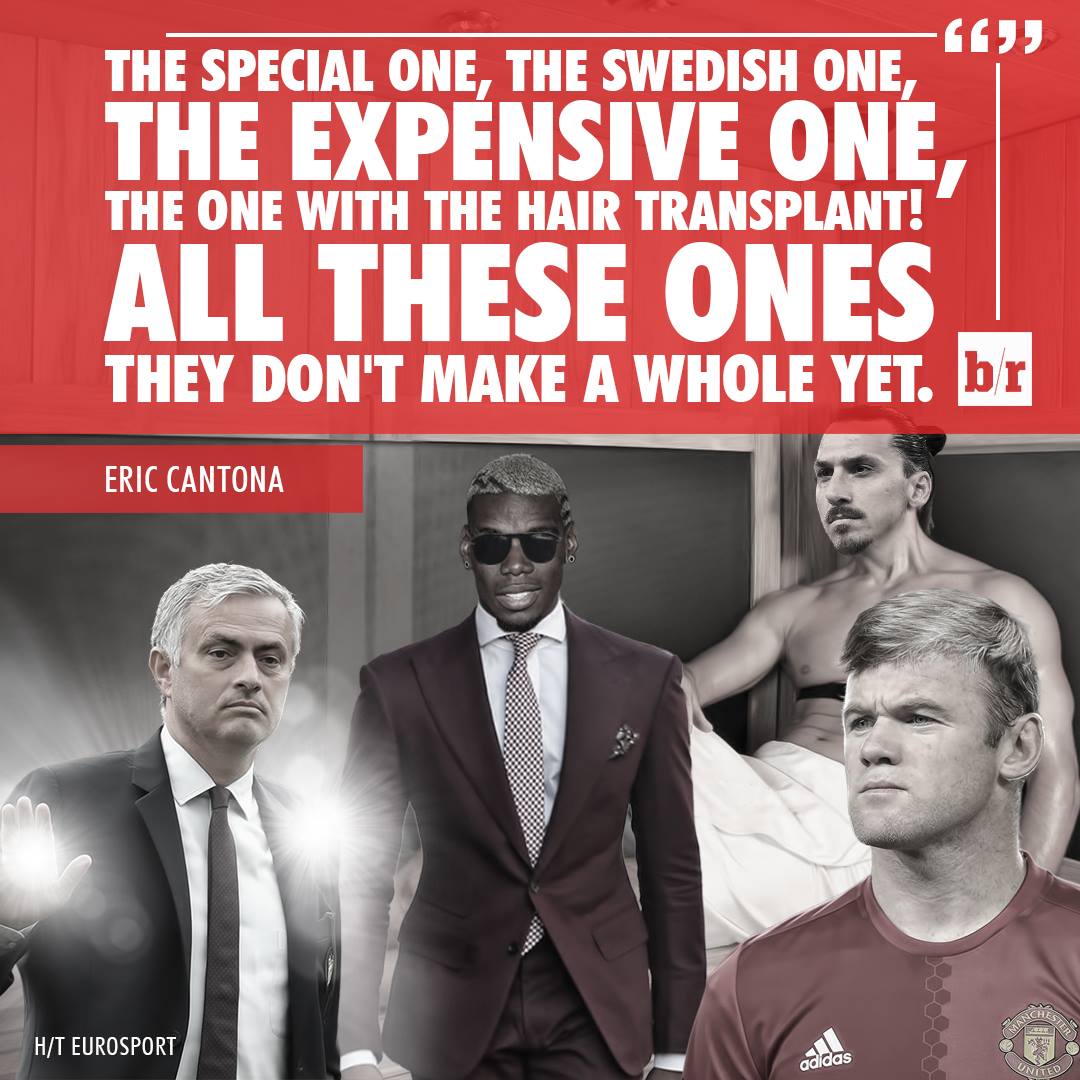 Moyes had commented yesterday before his game that now people might see that it was not all and only down to him.Arguably the problem with Manchester United over the past three years has been either they have given more time than necessary to be ruthless and then sack the manager in a late panic.

If they went with Moyes,they should have let him have a proper transfer window and seen him for 6 months.Especially Van Goal after overhauling the squad putting a system for it in place and getting 4th place then 5th place with an FA cup win should have been allowed to complete his 3yr course or if they were truly ruthless and clear they should have sacked Van Gaal when he was top of the table last season and got Klopp who fits all their dreams or pounced on Conte but media and fan pressure made them settle on Jose,not that he is bad by any means but he has certainly lost his mojo:

He no longer has the good fortune of having the number one squad domestically which is dominant over others and money to add what ever he needs which happened in his 1st chelsea stint and at interns soon as he face proper equal competition, his success rate decreased like at real madrid and then at chelsea for the second time and he has never built a team or squad from the base up and kept it well, he needs to change here to succeed and there maybe something wrong in the atmosphere of Manu too nowadays contributing. 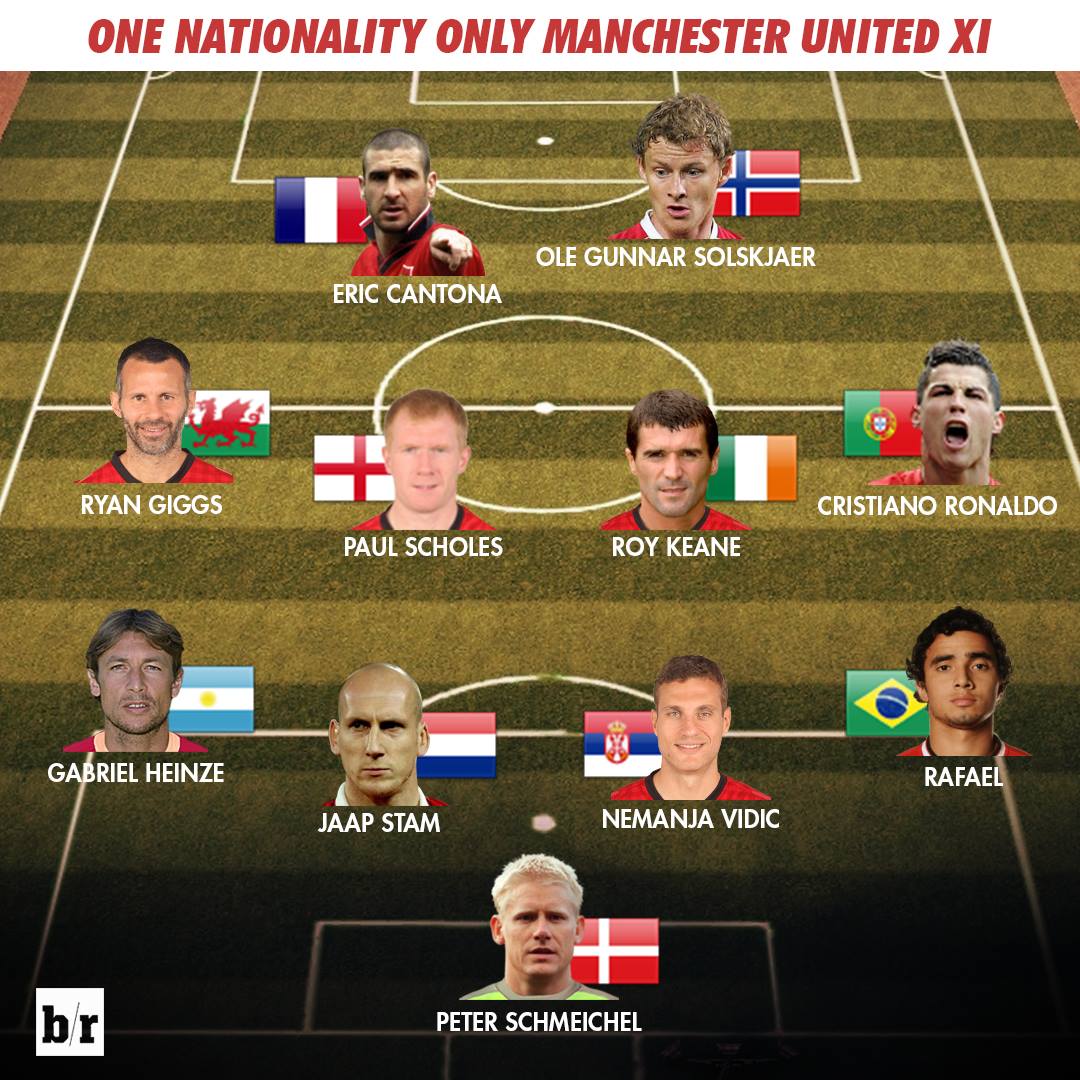 Frankly ridiculous how Rafael is there. "Lots" of other good options too, but for me this would be it:

1. Schmeichel, Giggs, Scholes, Keane, Best and Cantona have to be in. This means no Beckham, Charlton, Rooney, Neville, Ferdinand, Foulkes, Robson or Evra.

2. Missing the entire back four. Buchan can go in here, taking Law out of the equation. Vidic partners up with the scot. Valencia for the right, and for the left... shit. Maybe Evra and Cantona leaves the team?

4. Attack. Ronaldo joins Best. Only missing a centre forward... Cantona could lend a hand, so could the already mentioned Law and Mark Hughes, but there are plenty of good options left. Solskjaer, Van Nistelrooy, and a few others. Solskjaer clearly wins in regard to honours with the club, and was a fan favourite.

5. Evra out. Stam has to come in for the third spot.

6. The three from before remain. Valencia goes higher on the pitch, Giggs on the left.

8. Hum, not really... taking one of the forwards for somebody like... Park, Mata or even Anderson would be a step back.

9. Final lineup. Cantona changes the club and the fans in ways Evra never did. For that, it's worth the risk of having a very attacking Giggs as all rounder on the left, and using a not so usual formation for United.

We've typically played 4-4-2 over the last 20 years, 4-3-3 only really started to happen about 8 years ago when we'd go away to Arsenal knowing we could soak up the pressure and rape them on the counter.

Neville has been our best right back, but Scholes is a gimmy so that rules him out. Same applies to Wes Brown. O'Shea was a decent utility man but often played LB I believe, plus is Irish. Rafael was often all over the place and very reckless; Valencia often impresses at RB so can see why his name comes up.

The rest, can't really argue with. No Dutchman in there (van Nistelrooy or Van Der Sar). Heinze was good for a few years but Irwin was for many, but like Keane, is Irish.

We've typically played 4-4-2 over the last 20 years, 4-3-3 only really started to happen about 8 years ago when we'd go away to Arsenal knowing we could soak up the pressure and rape them on the counter.
Click to expand...

Yeah, I tried to stick to it but this way gives room to more options.

Neville was one of the biggest names left out, as for the dutch they both have better competition there.

rebelinho said:
Yeah, I tried to stick to it but this way gives room to more options.

Neville was one of the biggest names left out, as for the dutch they both have better competition there.
Click to expand...

Scholes is one of the greatest ever players to have played for the club, so I couldn't leave him out for Neville!

Ruud scored a lot of goals, but Solskjaer has been the only player we've had in this era that when a chance fell to him, I'd put everything I owned on him scoring.

Continuing on the hypothetical field, how about an all english United lineup?

The number of big players this club has had is truly impressive.

Questions about Lindelof and/or Semedo? 40+5 million is too much imo, no word about the values in Semedo's deal.

If we are able to get £30m for that fat cunt and his wages off the books, I will personally blow Mourinho.

Never thought I'd want to win the UEFA cup so much.
Quite confident that we could make a challenge next year even though challenging for a title seems so far away. Hopefully we let Smalling and Jones go in the summer. Impressed with Rojo this year. Need another CB in though to play alongside Bailly who I love.

Lost our unbeaten run, but let's be honest while a good little run hardly something to be proud of.
Fully behind Jose but the negativity at home has been pretty shit. Been a few games this year at home and barring the boro game on new years eve all been dull matches. Fans seem to be giving him a lot of leeway though, probably mainly down to what came before and looks more like his project is going somewhere.