I've started my BL on Top Player in the Liga Adelante with Gimnàstic de Tarragona playing as a 190 cm target man from Portugal. Getting really p***ed off at the AI of my team really. Yes they make good runs and stuff but my teammates are just lumping inaccurate long balls into space that always gets intercepted and when I call for the ball they always try to lob it into me hoping I have the pace of Ronaldo to latch onto it. I'm seeing not much variety of build-up play in place here compared to the opposing AI which plays fluid football as well as route 1, both being equally effective. And another serious note, not enough fouls committed by the opposing team, virtually 0 fouls every match for the AI. Gets under my skin really.. Other than that, it was fairly enjoyable.. :innocent:

Traditional wisdom suggests playing in accordance with the team instructions to squeeze that bit of extra support from your AI team mates. I hope things will improve as your Team work stat and team chemistry improve. All the best.

Sorry for the late reply. Well I've changed clubs since and it was slightly better in terms of attacking-play but there are still major issues regarding the handicap on my team's AI, passing is not fluid and not accurate at all. Most times when i pass to a teammate they would just wait for the ball to come to feet rather than move towards it (defenders immediately closes down and wins the ball). Team pressing is also a major issue in most BAL in recent PES versions and PES 2016 is no different. Your team will just not press opponents when required and when u press the pass key (teammate pressure) they would realign their body positions to be behind the player to chase them down instead of cutting out passes or making tackles.
O

Nando you are absolutely right..in pes2016 you AI teammates are absolutely ass...All the things you have stated initially is what I'm experiencing too...it's just rubbish

Created a player last week or so. DMF, "The Destroyer" playing style. Chose La Liga 2 (wanted to have the chance to help promote a team).

Lo and behold, I got placed at Numancia. Nothing wrong with that. The problem is this is a team with Counter Attack, Long Passing attacking tactics, and Conservative AOD defensive tactics. It's like playing with 8 year old kids. I pass them the ball, they'll promptly kick it forward like madmen.

Like said above, your teammates "AI" is atrocious compared to the opposition. I'm playing in Superstar, maybe if the difficulty is decreased they'll behave more in accordance to each other.

Your team's defensive awareness is borderline non existent. They don't press. They don't help each other. No awareness of empty spaces. If one player is chasing the ball, the rest acts like their dead. Terrible.

Attacking awareness is a tad better. Sometimes they do pass the ball around a bit. Asking for the ball is key to avoid the usual long pass to the opposition's keeper. The result is you end up getting very involved in the team's plays.

Numancia always play in a 4-2-3-1 (with 5 in the midfield, the striker is absolutely alone up there), and while I started as a part of those 2 DMFs, after 5 games I was being deployed as a RMF. But regardless of your position you always end up roaming pretty much everywhere (I try to keep myself in the right half of the pitch though), trying to press the opposition, cut passing lines and overall just fixing up their atrocious defensive positional sense.

Anyway... after a difficult start we actually started winning some games. I tried my best to keep calm, and eventually the bottom-5 team was in the top half. With 6 or 7 games to go (and after being easily dispatched from Copa Del Rey) we were actually fighting for a place in the top 6, gaining access to the promotion playoff. In the end it was an "easy task". 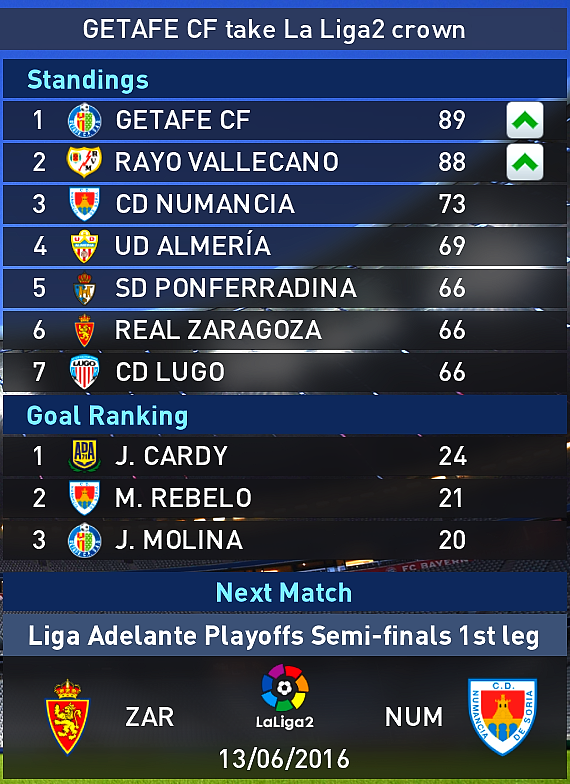 - Zaragoza won both league games against us. Both by a 3-1 scoreline.

- Cardy, the league's top scorer, is also a DMF.

- Despite having the crazy stats below... 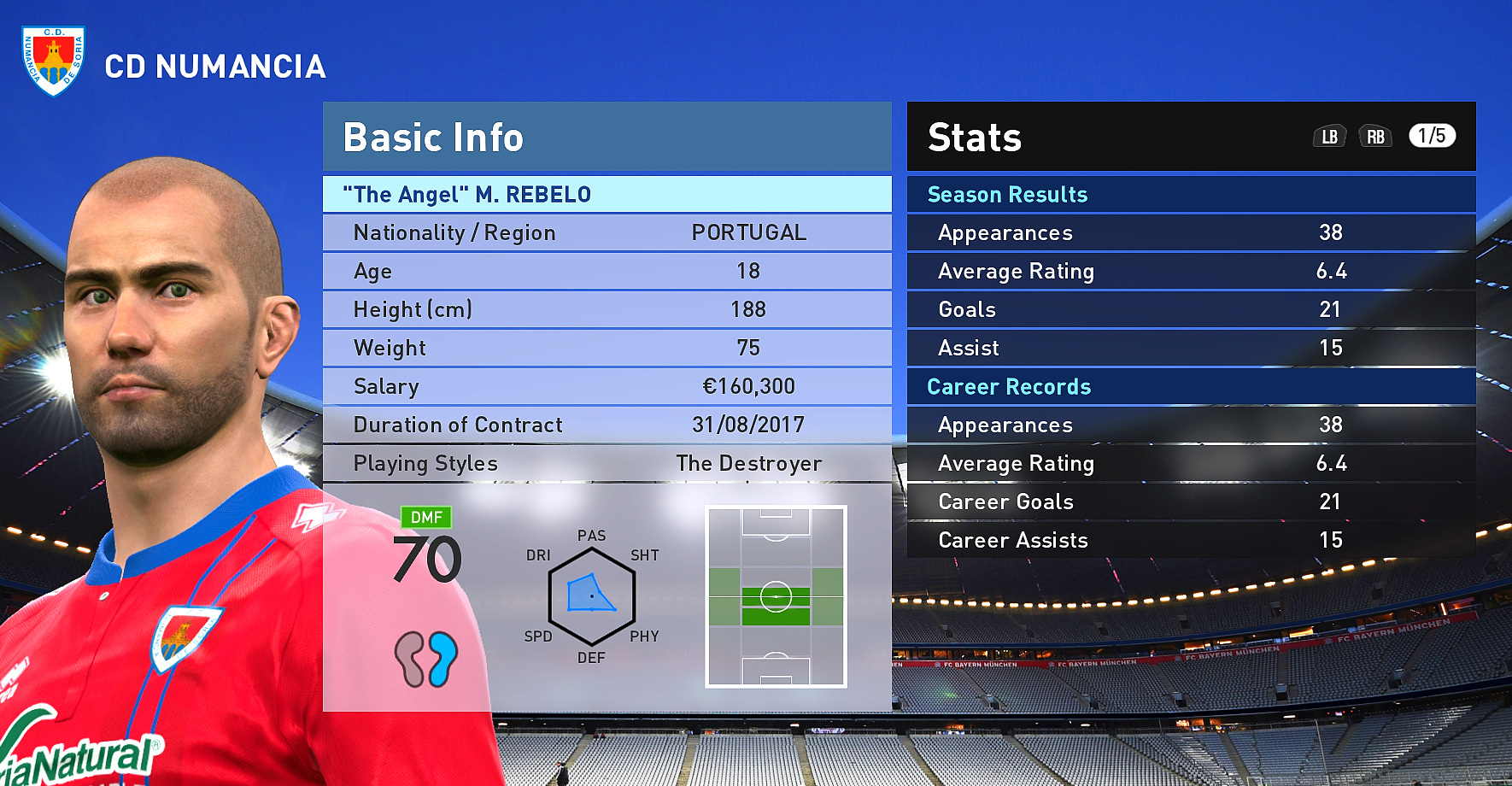 ... I wasn't chosen for the league TOTS. Was awarded the Top Assister prize though.

- Tried to leave in January. Asked Las Palmas, Real Sociedad, Rayo Vallecano, Wolverhampton and San Lorenzo for a transfer, all of them denied.

- During the season managed to get both Weighted Pass and Heading skills. Next will be Man Marking and then Captaincy and/or Long Range Drive.

- Reagardless of what happen in the playoff, I will not play for a Counter Attacking with Long Passing, Conservative AOD team ever again. This shit is stressing.

The first playoff game was going okay. 70 mins, 0-0, could be worse. Then a horrific tackle got me from behind and an injury ensues. 5 minutes later Zaragoza score. 2nd hand ended 0-0 and Numancia were denied the chance to get trashed by the big boys.

As soon as the transfer window opened I tried to secure a transfer to a better team. Las Palmas said no, repeatedly, and the same answer was given by Fulham, Wolverhampton, Fiorentina, River Plate, Lyon and a few other teams. Then the good news.

Vitesse were happy to receive the transfer request. Their answer was the most positive, salary four times higher, and likely a starting XI spot waiting. So Eredivisie would now be the league to follow. 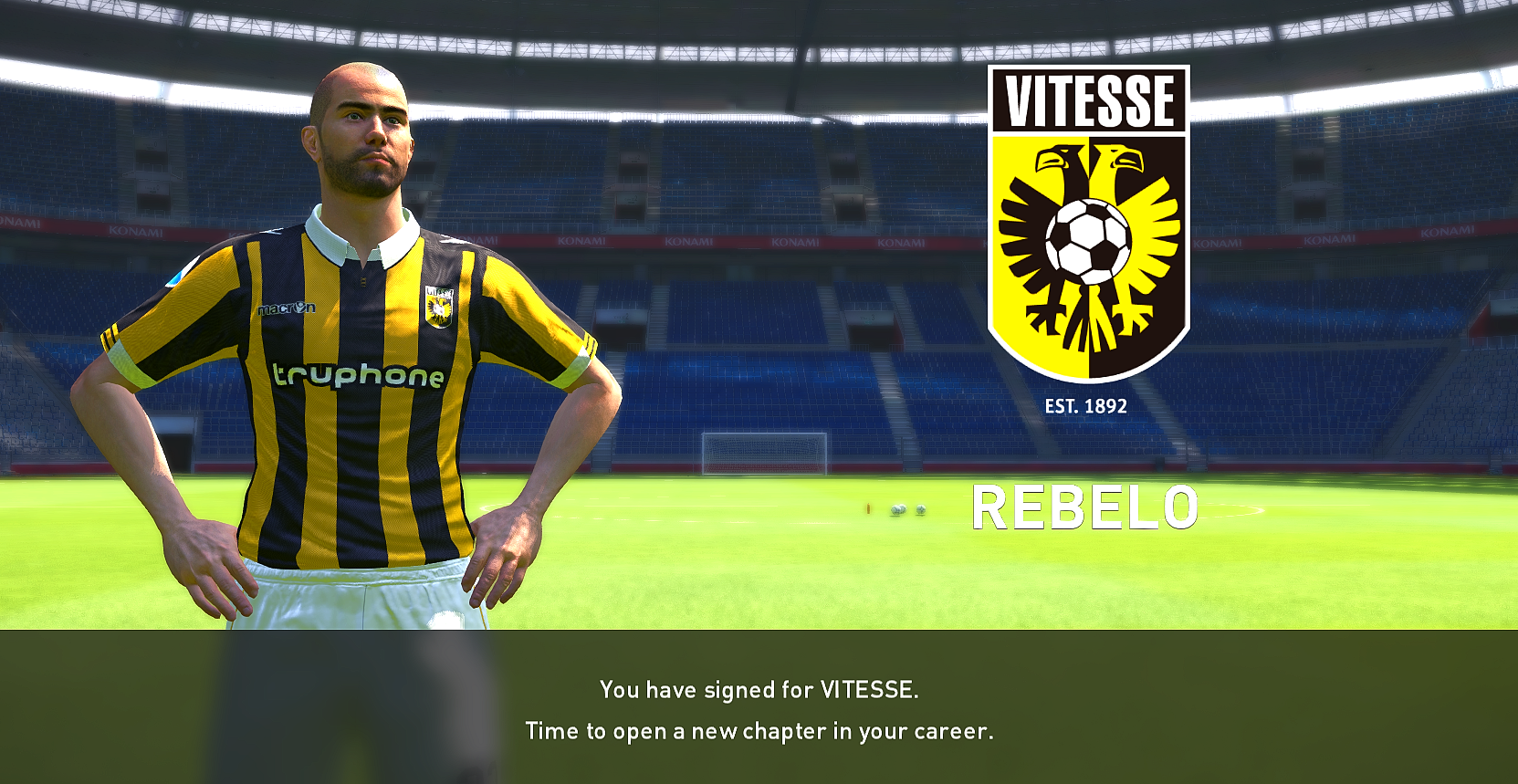 The first league game (just two days after the transfer was finalised) ended 0-0. But the team was so much better than Numancia... This is the most fun I've had with PES in quite some time. they play well when on the ball. Quick passing, good movement. Off the ball, they press high and get the ball quickly. They actually look like Artificial Intelligence. This is a whole new world coming from the shitshow LaLiga 2 proved to be, specially teams like Numancia.
You must log in or register to reply here.
Share:
Facebook Twitter Reddit Pinterest Tumblr WhatsApp Email Share Link
Top