Started a ML on PES 2021, after a very deep save on PES 2020. As i have not yet concluded what OF i will create for my game, i started an experimental save with Samut Prakan City FC, of TOYOTA Thai League.

First two videos were some test saves i started, only to check things out.
Here is the full playlist link

And the regular save run here. The transfer i did IN are, Scocco, Tevez, Cerci, Koyalipou and 2 RBs my scout suggested. Did not manage to sign a player with role of Playmaker or Smartplayer to boost my Team Spirit. MAybe next transfer window if i achieve to gather some money.

slamsoze said:
Started a ML on PES 2021, after a very deep save on PES 2020. As i have not yet concluded what OF i will create for my game, i started an experimental save with Samut Prakan City FC, of TOYOTA Thai League.

First two videos were some test saves i started, only to check things out.
Here is the full playlist link

Let's do a quick catch up, as i am starting my 3rd season by now.

In the 1st season i did the double crown, won Thai League and Thai Cup!
Cup final


2nd Season i participated in ICC and AFC Champions League. In both competitions i was runner up, as i was second in ICC and lost in the double finals of AFC CL. In Thai cup i was eliminated from the first round and i won again back2back the Thai League. I also won the Thai Supercup in the beggining of the season.

After all the transfer i did in 2nd season, i have a 4* team by now, which by OPR is the best team in all Asia. Winning the AFC CL is an oneway road now.

And the AFC Champions League final , both two games!

Approaching the conclusion of this current save, which was enjoyfull enough. The experiment of playing in the Asia section was really interesting, and i will repeat sometime in the future.

So the end of the line, since the latest Datapack was released, will be our Course to the AFC Champions League. If we eliminate, the career concludes. If we advance, we keep going. Our target is to conquer the Title of Asian champions and then play to FIFA Club World Cup.

In the meantime, we will have a little intervention on July of 2022, cause i must play FIFA Worlc CUP 2022 , managing Costa Rica.

Now i am on May of 2022, third season in Thailand. After the recent derby battle for top position in the 10th matchday, i passed 1st, 3 points ahead of second.

And now in hot news. We started in AFC CL, with very bad signs. In the first 3 matches we were 1W-1D-1L. In the second turn of group stage, we fightedback, making 2/2 wins and achieving our promotion in knockout stage by the 5th matchday.

It's been a lot time since my last post. My previous ML save, my first one in PES 2021, was successfull 99,9%.
Won the AFC CL in my 3rd season, won the FIFA Club World Cup, and played against World Selection, in the World Selection Challenge.

So next i tried some project, in Europe with PISA AC. Spent a lot seasons, 2 in Serie B, 2 in Serie A.
Then i moved to Paris FC, promoted in my 2nd season there, 6 in total.

Then i restarted the save, again in Paris FC, won the Ligue 2 in my first season , and promotion. In my first season in Ligue 1, i was point blank behind PSG, in the second position an ready to challenge the league.

Then Final DataPack happened, and due to many players added in European NTs, i decided to restart the save for a second time, but to keep this (so no summer transfer in this ML save, no Messi to PSG.

To be fair over myself and PFC, i tried to repeat the wins of my previous save. I achieved to win again the Ligue 2 back to back, and finish 2nd in Ligue 1.
Some of my key moments.

This season started with big ups and downs, now after January of 2023, we started to coming back to shape.

In Champions League, round of 16, first leg we face SL Benfica.

i did a ML with a thai team and i was going to set one up with Paris FC to try and rival PSG too.

The Dude said:
i did a ML with a thai team and i was going to set one up with Paris FC to try and rival PSG too.
Click to expand...

Paris FC is a love i have since PES 2018. iIRC it was you who introduced me to the team, by a post of yours regarding Bastia's replacement back then.

Thai League was also a very pleasant experience, the League and Teams, kits, etc is a lot polished, although in pes 2019 when it was unplayable in ML/League mode, it was more polished, but here it is ok again.

My only problem was, cause of the ML structure, if you like something more exotic than the regional league, you are forced to play for 2 objectives, either win the League or the Thai cup. If there was the equivalent of Europa League in AFC version, or had AFC CL qualifications, things would be more spicy.

Played the CL round of 16 rematch against SL Benfica. First match in Lisbon was 2-2.

Our lack of experience costed us in the end... A bad pass from CB to GK and a bad pass from GK to CB, defined the final result. Two very bad decisions.

Benfica did the 0-1 early from our mistake.

Unfortunately a stupid decision, a pass by our GK in the worst place possible, minute 89', led to a ball steal by opponent CF and a goal for 3-3. A score favouring Benfica and dismissing our 1st leg advantage.

The match ended with the most tragic epilogue, after a fast passing build up, Koyalipou taps in for our last hope, but ball travells some centimetres away from goal post.

We continue with only one mission this season, finish in the better position we can achieve in Ligue 1.

Fast recap. The above season ended. We finished 2nd again, behind the invinsible PSG.

Final lap of the season

After latest match, Matchday 28, the league table is: 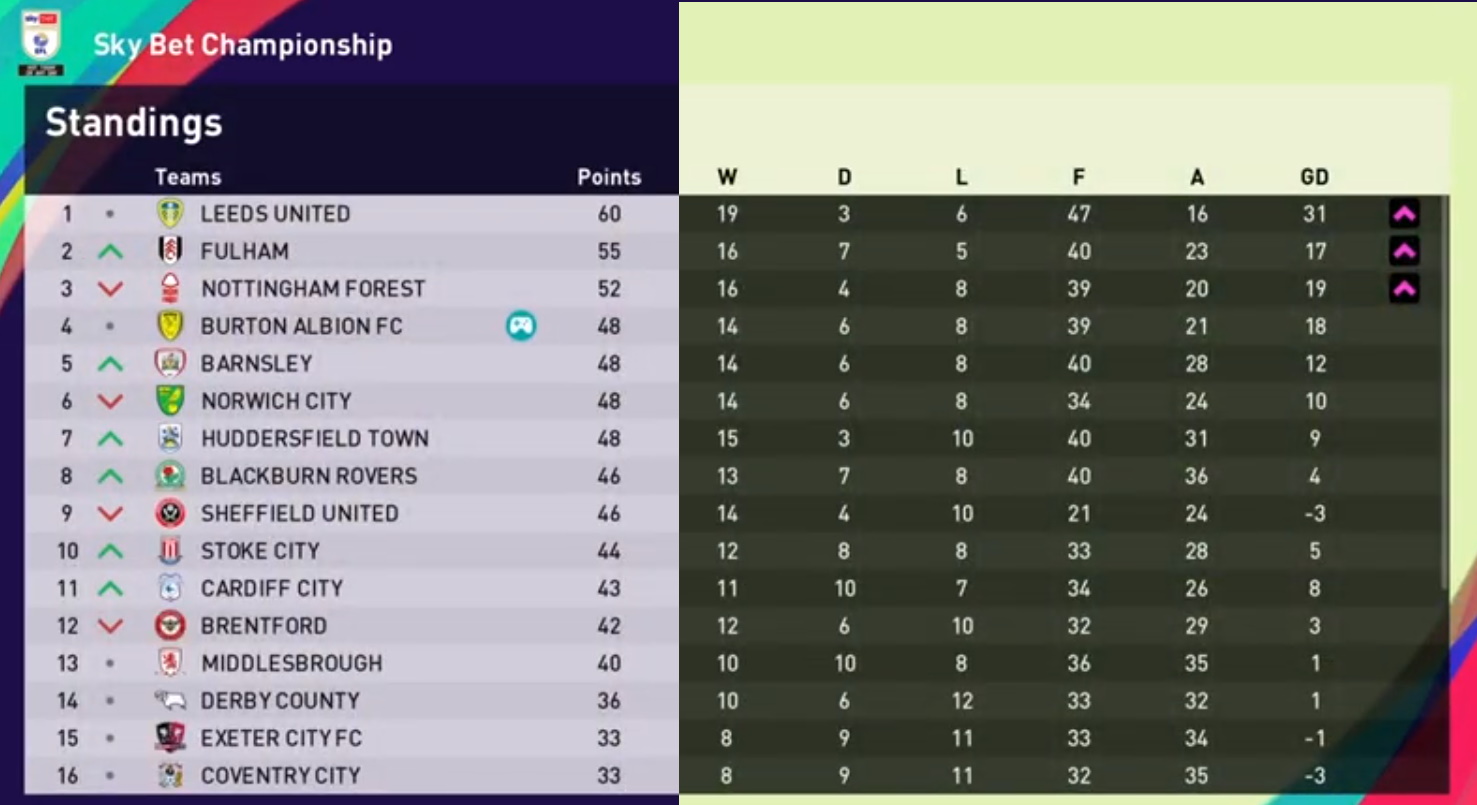