Dragonfly said:
The towel trick is a short-term fix, I'm afraid. I tried it and it only worked for about three days. If you're happy to do this every time your console breaks, go for it - it's cheaper than having to buy a new console.
Click to expand...

We're talking about actually trying to cause RRoD, not prevent it.

You shouldn't have to do anything or pay Scouse.

Hunter said:
We're talking about actually trying to cause RRoD, not prevent it.
Click to expand...

The towel trick re-melts the cheap ass solder used in the 360 which has a tendency to crack due to the constant heat-up & cool down cycle.

The easiest way to get the rrod is to use the towel trick 4-5 times. Shuld fuck the solder enough to get the E74 error, which is now covered under the 3-year from DOM date on the back of the console.

I only had 1 red light (usually a problem with the display chip contact rather than the CPU, but still caused by the poor solder issue) but any E74 error is now covered for 3-years.

Hopefully I should get mine back in the next week or so... :crymore:

I imagine you'll get your 360 back, I had to send mine off to Frankfurt as well and I received it back within 6 days amazingly. Top service from the Xbox team for that one, I'll give them that.

I've an enquiry I'll run by all you Xbox 360 nuts. I'm after "Sid Meier's Civilization Revolution", but don't really want to pay much for it. The SendIt website were selling it yesterday for around £8 but now they've notched it back up to £12 unfortunately. I know £4 isn't much, but that £4 could buy me a special edition DVD. Student budget and all that, trying to keep the money tight and I set boundaries. I wouldn't pay more than £20 for FIFA at a time when it was generally £25+, and I managed to find it for £17 after searching in depth. I hope the same can apply here, as I want "Sid Meier's Civilization Revolution" for less than £10.

RossyBoy, please note that I DO NOT OWN GEARS OF WAR 2!

Looking on my profile will tell you this. Perhaps the fact that I've never accepted an invite from you to come play GOW2, would suggest I don't own it.

Please stop sending me invites whilst I'm playing CoD4, as it will result in me dying whilst one kill away from a helicopter which in turn will cause me to lose my fucking rag.

I think my xbox is dying

My mate went away this weekend and gave me his 360 to look after.

I've got another mate coming round this evening so was thinking of renting out a game for us to play, any suggestions?

Unfortunately I don't have times to play games much these days, so I don't have a console, and I don't really have a clue what's out there.

I want something that is fun for two people to play, and that is quick to pick up. Oh and it can't be FPS, I get motion sickness...

EDIT: By the way, does anyone else get motion sickness from playing FPS? I haven't met anyone who does.

UFC 2009 Undisputed could be a very good choice, it's very fun and pick-up-and-play, great to play with a mate surely.

(I don't have the game, but the Demo is very very good, and I'm sure all the UFC owners will give you their views on it too - )

Fifa 09 would be a good one too. What sort of games you into?

I went for Tiger Woods in the end RB14. I too thought a sport game would probably be best, but as I haven't seen the guy in quite a while so wanted something that we could play whilst we chat.

Cool mate, not a bad choice at all I would've suggested WSC Real 09 for chatting & playing but nevermind lol, have a good time with him! Make sure you win though!
F

Aaronarid said:
EDIT: By the way, does anyone else get motion sickness from playing FPS? I haven't met anyone who does.
Click to expand...

I get it sometimes. Usually when I haven't played FPS games in months. It's quite easy to lose it though. Play the game until you get motion sickness, and rest for a while. Eventually, you'll lose it. Lowering the sensitivity also helps. I always set mine on less than 1/4 of the bar.

Pay per view sports would be appealing.

Heard about this few days ago.

Finally i can get Sky without a dish and Digibox in me bed room. 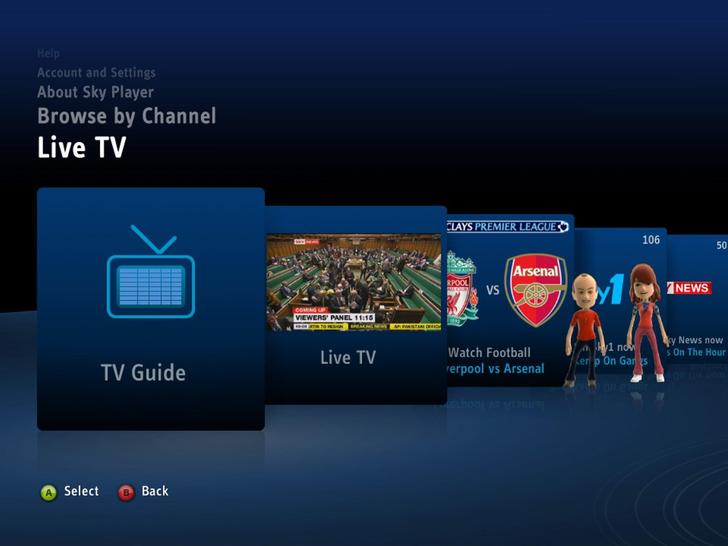 I hope the stream quality is good and it's not too expensive. I can always find streams online, but if it's worth paying for, I will.