Hey mate Nice work I also got bored playing master league on pes '17 (PS3) as well.I know you're still on 16 I picked Leeds at random bad mistake they have so many rival clubs AI generates some incredible comebacks and losses.But I started a BAL in the Chilean league that I run in parallel and that's managed to keep it interesting I know you love you're stats (how does a fictional player you have personally created match up stat wise? & are they developed any differently if you absorb them into your team at a young age while their stats are low?) worth a look
good gaming
always enjoy reading your ML posts
cheers

10 seasons. My longest ML run ever. Took me 8 months. Top 10s for the most important stats. 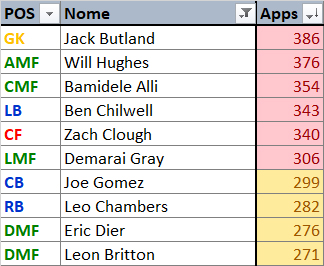 As expected each position has a player that has played a shitload of games. Exception made to DMF where two players appear: the initial option Dier, and Britton, who has played most games for 3 seasons now and played occasionally as DMF and CMF before that. 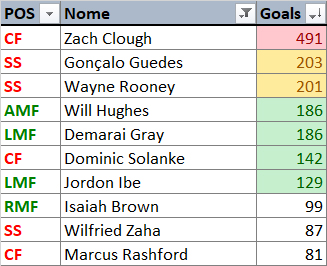 Some tremendous numbers here. 49 goals per season is an incredible feat, but this includes the first 4 seasons where those numbers never went above 40 goals. With the current stats, Zach Clough is the best striker I've used in PES2016. 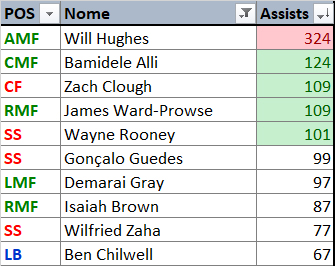 Outstanding numbers here as well. Hughes as expected, Clough proving his range of abilities, and a great score for Ward-Prowse. This also puts Clough, Hughes and Rooney and the only 3 players with more than 100 goals and assists. 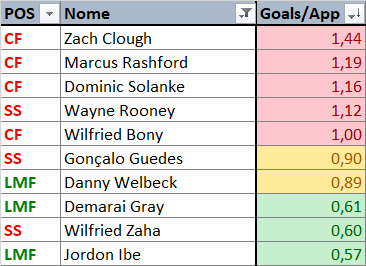 Rashford proving himself as a great striker, even if he didn't really fit the style of the team. Clough is just ridiculous. Compared to the Porto ML, André Silva still gets the upper hand with 1.59 goals/game, Ronaldo with 1.34, while the 3rd place goes to Paciência with 0.92. The Swans had their goals scored by a bigger numbers of players, proving a better squad depth. 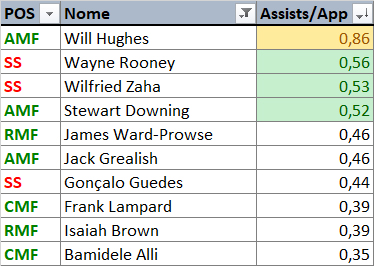 Hughes is by far the most intelligent offensive midfielder I've ever used. "Assist king" Bernardo Silva has a relatively mediocre ratio of just 0.54 assists/game. Light-years behind Hughes. The best passer from Porto was Quaresma with 0.76 assists/game, which is closer to Hughes, proving that the new formation actually influences who gets the most assists (and having a better target for crosses). 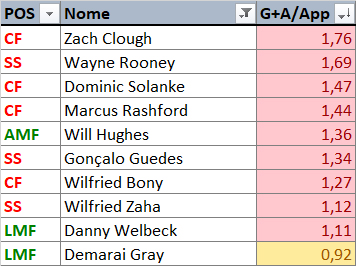 The most important stat. Who's the most relevant player in the team? No surprises as Clough takes the prize, followed by a very consistent Rooney. Hughes' incredible assists stats are not enough for a bronze medal though, with the prolific Solanke and Rashford taking spots 3 and 4. Worth noting the 9 players with more than one direct goal contribution per game.

The best clash though is between Rooney and Quaresma. Both regens of the highest order, with more or less similar stats and roles in the team, they register ratios of 1.69 and 1.51 respectively.

Baines is, unsurprisingly, the most prolific defender. Crossing and set piece ability well above anything else in the squad, let alone defensive players. Worth noting Valencia's unstoppable marauding runs which often result in solo goals. 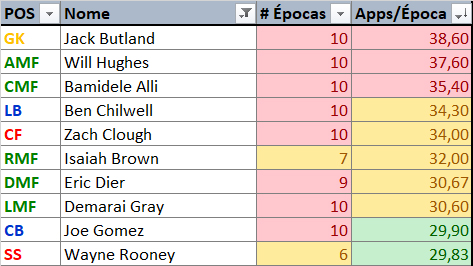 Butland takes the crown as the most used player, followed by talisman Hughes and tireless Dele Alli in the midfield. Clough missing the top 3 due to the few injuries he's picked up throughout the years. Also worth noting the absence of a right back, a position that as seen 3/4 players in just 10 years.

Actually I fucked up my PC while trying to install NFS Most Wanted 2005, and by some miracle I managed to not lose my PES save. This was maybe a month ago? Anyway, the game files were gone, and so were the faces.

I tried a Maradona/Valderrama look, didn't work. Neither did a mohawk. In the end I tried to get a short-but-strong, tank like appearance of some south-american players, like Chumpitaz for example. A moustache was added, obviously. 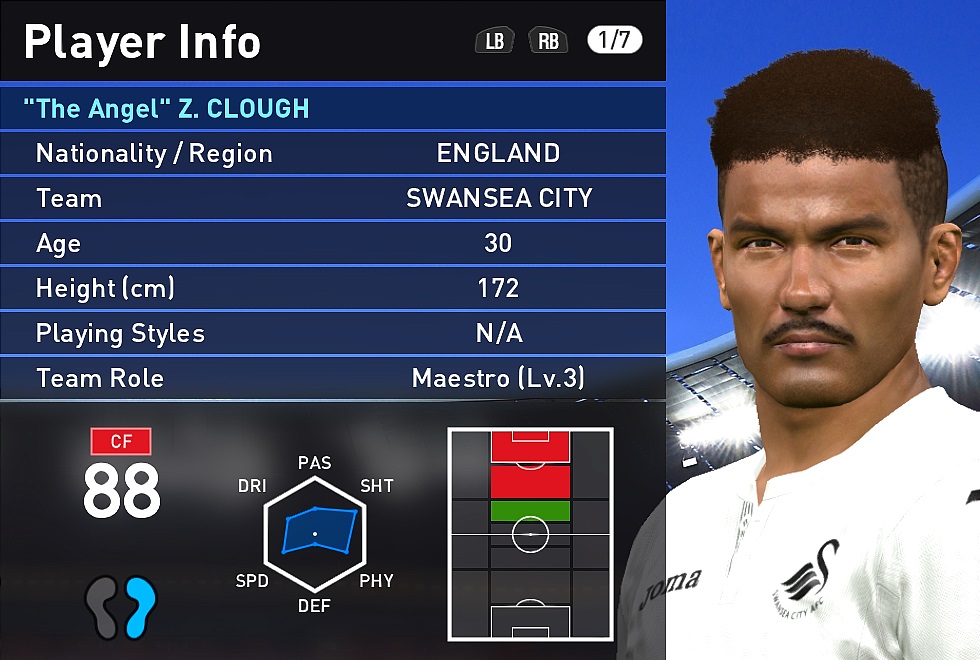 Beautiful, isn't it. I swear you can feel the opposition shaking when the match starts.

For the first time ever, one of my earlier players is retiring while still with the team. His stats will come when the current season ends. 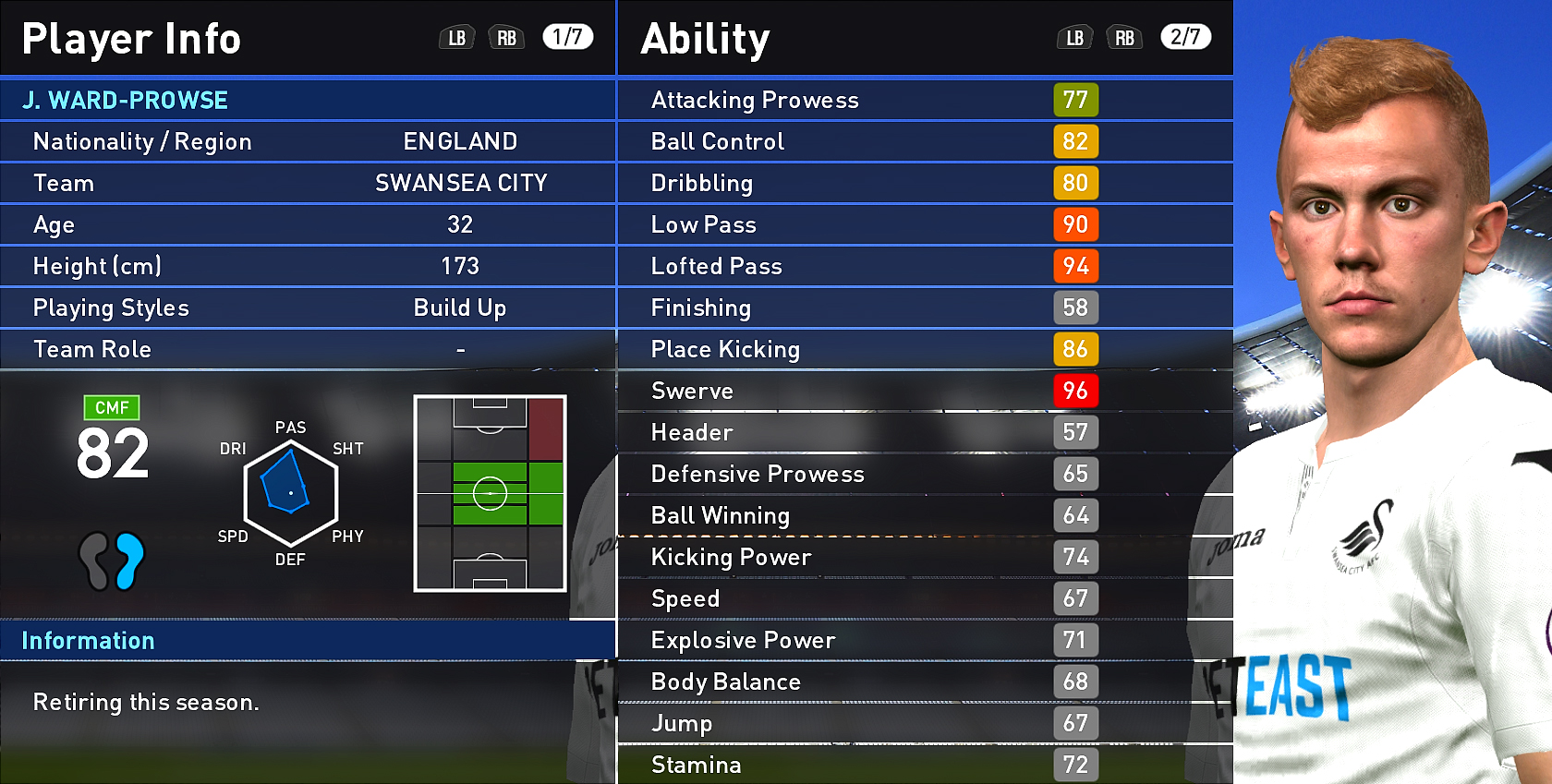 For reference, this is the earliest screenshot I have of him. Notice the tan, clear sign of a successful career in the sunny Wales.

Also, this proves that Header is affected by either Shooting or Defence training. 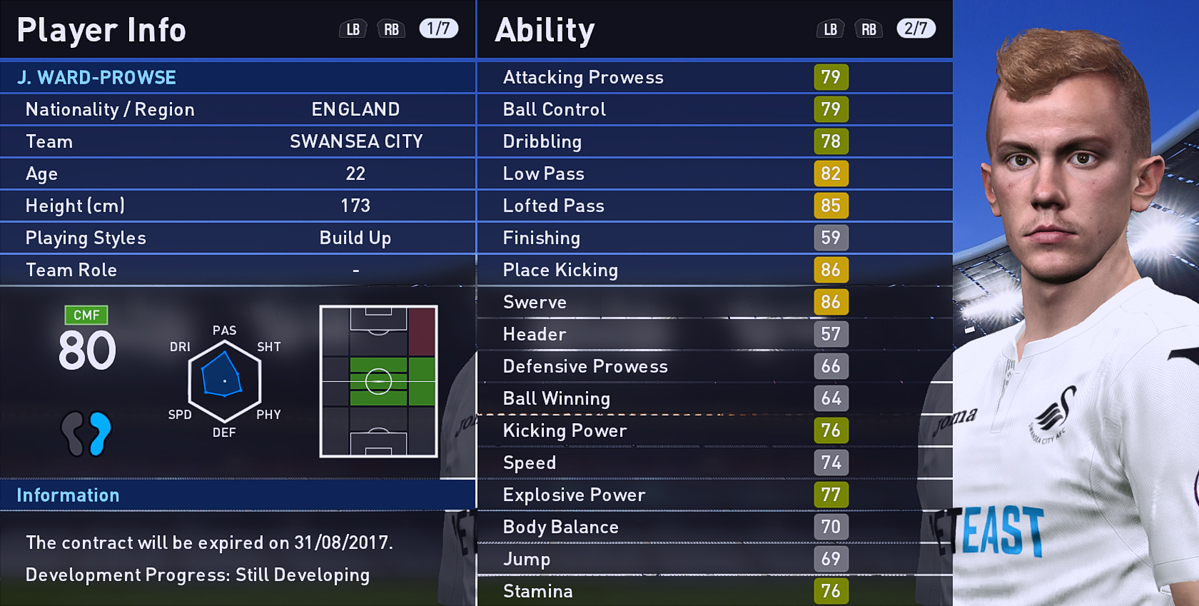